13 Must-Watch Underrated Series That You May Have Missed 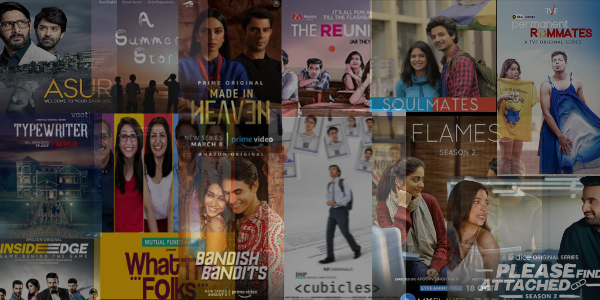 A Series is a sequence of episodes that are telecasted one at a time. It has a series of episodes and not just one movie. The Series can be 30-60 minutes long depending upon the number of episodes. Today, OTT platforms like Netflix, Amazon Prime, Voot select, Zee 5, YouTube, and so on. After the pandemic came, these platforms became the hub for the people to watch movies and series as movie halls or cinema halls were shut. Series like Money heist, Mirzapur, Special ops are quite famous today and people loved them. But there are many series that are underrated and are good. The direction, the storyline, and the acting is so raw and so good in some of these series, that these are must-watch ones. The underrated means these aren’t quite popular among people.

Following are the 13 must-watch underrated series:

Asur is a web series available on Voot select. It is written by Niren Bhatt, Gaurav Shukla, Pranay Patwardhan, and Abhijeet Khuman. Asur is a crime, thriller, and mystery genre. It was directed by Oni Sen. Arshad Warsi, Anupriya Goenka, Barun Sobti, and Ridhi Dogra as the main actors and actresses in this series. This series revolves around the concept of serial killings in the name of God. It includes mythology, suspense, and murders. It is recommended because of its plot which is quite different from most of the series.

A Summer Story is based on the story of an Indian American Girl who visits India for the first time and meets three boys who look after her while she focuses on helping them out in their struggles. The main stars of this mini-series are Arya Singhal, Pourush Singh, Shivam Jemini, and Rohit Raghavendra. Summer Story has 6 episodes. It is recommended because it shows how a new person can change your life and inspire you to do things even though they are struggling. It is available on YouTube.

A typewriter is available on Netflix. It is a horror series in which there is a haunted house and it hunts ghosts. The lead actors of this series are Purab Kohli, Jisshu Sengupta, Palomi Ghosh, and Sameer Kochhar. It is recommended because it is a horror drama and it was made by Indians and it is well written and produced.

This web series is available on YouTube. The lead characters are Ayush Mehra and Barkha Singh. The 2 office colleagues suddenly decide to be flatmates and eventually fall in love with each other. This is suggested because it is a short, sweet romantic couple story. There are less drama and a rawer story in it. They recently released the second season with a bonus episode on YouTube.

A TVF original series, which stars Abhishek Chauhan, Nidhi Bisht, and Arnav Bhasin. It is available in the TVF application or on YouTube. Based on life in the office cubicles and how it changes when someone new enters. It is a typical first jobber life & the people around him.

Priyanshu is an aspiring music composer who is in Shillong chasing the girl of a rock band and he accidentally meets his schoolmate Anshul Chauhan who is on a solo bike trip across North-East India. They meet unexpectedly and fall in love with each other, or maybe they don’t. The lead actors of this web series are Priyanshu Painyuli, Gareth William Lyngwa, and Anshul Chauhan.

This series is available on YouTube on the Zoom channel. It is about the reunion of school friends after 10 years where most of them aren’t even in contact with each other and how life changes after school. How people change after a certain period of life and forget school friends but though they miss school life.

What The Folks have 3 seasons and revolve around the family and its issues. It is a family drama series from Dice Media. Folks is mainly about a recently married couple Anita and Nikhil who have to deal with their own personal lives and their families altogether. It is available on YouTube.

Made In Heaven is based on the lives of Tara and Karan, who are two wedding planners in Delhi. It revolves around the Big Fat Indian Wedding and all the work that goes behind it. The problems of arranging marriages, the dowry transactions, and the virginity tests are still a prominent part of it. It is an Amazon Prime original series.

It is a comedy and romance series with 2 seasons and is available on YouTube. Permanent Roommates stars Sumeet Vyas and Nidhi Singh who start dating and then get pregnant and all the fun. It shows the life of the couple and how they face the constant pressure of getting married.

It is all about singers and a singing competition with a little love affair. Tamanna Sharma (Shreya Chaudhary) who is a pop singer and Radhe Rathod (Ritwik Bhowmik) who is a classical singer falls in love. The story revolves around them and the Rathod family with their internal fights. Radhe struggles and juggles a lot between hiding about helping Tamanna to his family and also pursuing his own career goals (becoming Sangeet Samrat). Naseeruddin Shah and Sheeba Chaddha also play a vital role in this series. There are many songs in this series. This series is available on Amazon Prime. It is not much talked about but it’s a good series.

Available on MX Player and TVF Play, this is a cute little series that shows two schooling-going kids fall in love. It shows the love life of two teenagers Rajat and Ishita who study Science together. In the second season, they move in together. This series shows and teaches us the aspects of life like how parenting must be one, how teenagers behave at a certain age, etc. It’s about friendship, love, and family. Maintaining a relationship is difficult. This again is underrated series but is good to watch.

The inside edge is available on Amazon Prime. It is about cricket betting and match-fixing and how it is done. Inside edge has two seasons and shows the inside picture of cricket. It stars Richa Chadha, Angad Bedi, Tanuj Virwani, Sayani Gupta, Siddhant Chaturvedi, Amit Sial, and others. It is directed by Karan Anshuman.